A new update is out. This will be the last major update before going into the heavy codebase changes of the Universe update. This will include updating lwjgl, java, and a lot of other things to their latest stable major releases, so a lot of refactoring has to be done. During this period until the universe update there will still be updates for the current versions along the way, but they will be mostly minor features, fixes and balance changes, as we will fully focus on the universe update from here.

As said in the latest dev build, chasing a balance that would satisfy all types of players is nearly impossible, so the vanilla game is going to focus on the game as I envision it, while at the same time creating features so players can play the game like they want it to. Not only does this save a lot of time in development in the long run it also removes a lot of issues with balance since in the end it is subjective to the type of player.

The rule system is essentially the beginning of an in-game modding system. It is built very general from the ground up and will be able to support any type of condition/action imaginable in the game. It comes with a full GUI in the main menu and in-game, which is capable of uploading and applying changes automatically while in-game.

You can also import and export any amount of rules. This enables server admins to quickly setup a certain type of server without having to do all the configuration themselves. They can download and import anything they need.

This update focused on getting the rule system to run. It also focused on making rules as performant as possible, which means that a rule is only checked if any parameter of a condition for the targeted object changes. It has a fair number of conditions and actions already present but there will be a LOT more to add along the way.

Eventually the rules system will possibly also be used to create quests and other gameplay elements, so it can already be considered a very small part of the universe update in a way.

With rules there is now also a way for admins to track ships. Conditions can be used to place a tracker on ships. Admins can also now mark ships. This is mainly for admins to manually check ships that trigger their conditions.

(all commands also work with *_UID) 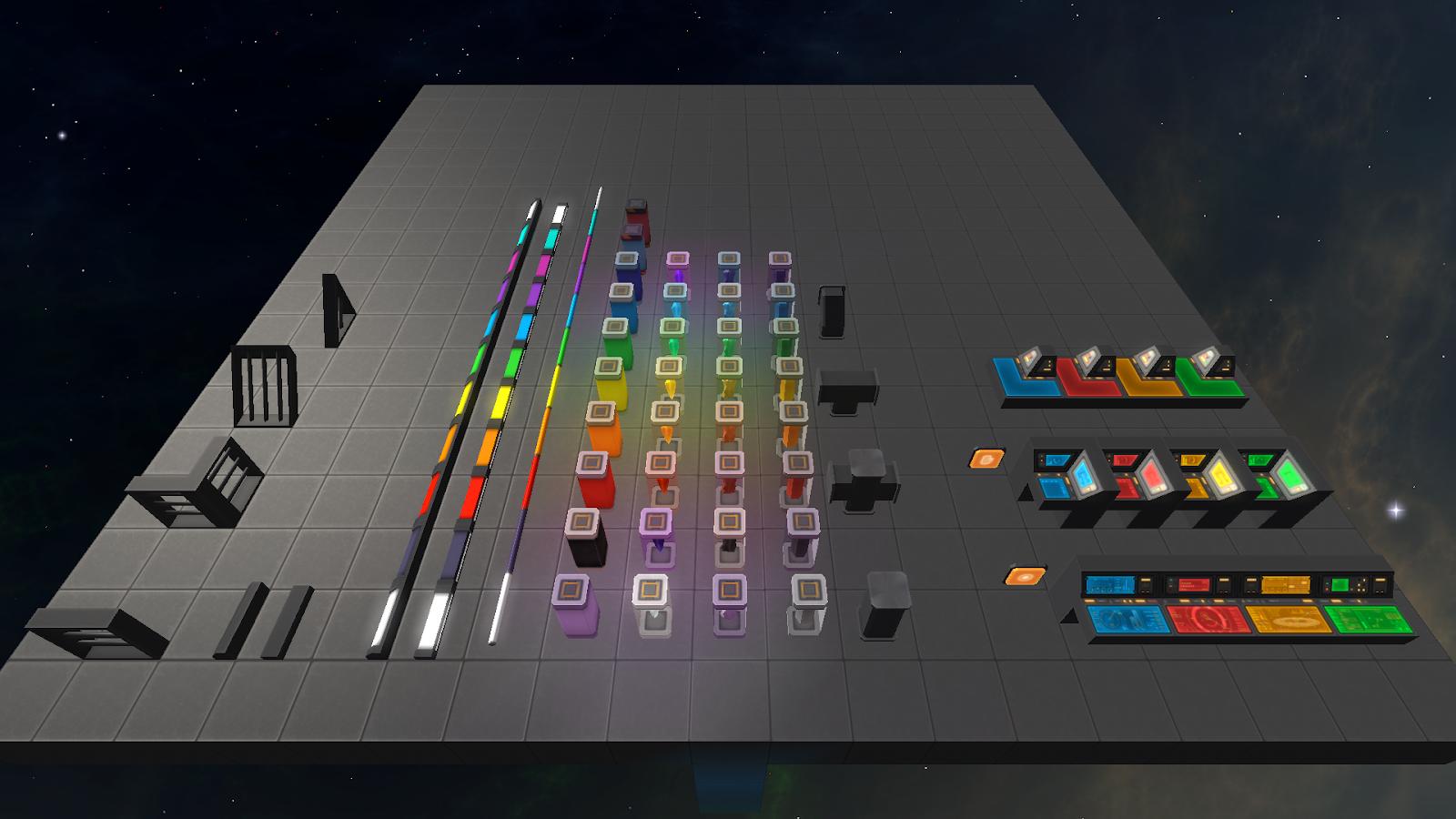 Saber and Kupu finished some beautiful new 3D assets. There have been slight tweaks to existing model unwraps and their textures, and many new additions. New models include (from left to right):

We also improved the block editor to make it a lot easier to import and create new 3D assets.

Additionally, some 3D assets now have different states when they are activated. We will expand that eventually to full animations on blocks for actions or just them being in idle state. This means you will be able to place animated modules on your ship.

*Paint Cans and Resource Capsules have had their default orientation rotated 90 degrees so they place vertically like the Pipe model. These will need to be replaced in old builds.*

3D assets now have full detail collision detection for astronauts as well as small enough projectiles/beams. This means you can now even shoot between the bars of grates.

Two major changes to balance are:

However, with the rules system both of these functions can be restored.

We’re currently working with community members on the Quickfire discord (a community driven initiative to help balance StarMade) to bring the games balance into a good state. The first step of doing that was to fix some essential bugs as well as provide more config capabilities and mechanics.

Here are a few major and some minor changes to the balance already:

There will likely be a lot more once the balance proposal is worked through. I have to disclaim though that I can’t promise that everything proposed will make it in.

Balance (all points are non final and might still change)

If you find any issue please let us know in our discord and we will get get right into hotfixing.

We wish you an awesome holidays and a very happy new year,