Posted by Calbiri over 6 years ago

Hello and welcome to StarMade,

finally the new update is done.  A whole bunch of game changes to features and optimizations have been made.

The most anticipated one is probably the new weapon system:

Based on the ideas and concepts of Calbiri and his discussion partners, this new system will change how ship weapons are designed in StarMade, and how the game is balanced.

First up: We have changed a lot of systems to improve balance.  These changes are based on calculating the strength of a system through group sizes and a linear growth of damage done or prevented.

But, if you don't like the current balance, don't worry, you can change it to what you like!  (This will apply to many other game settings, using configs to make custom servers and modding far easier.)

Also, our vanilla balance is currently in testing, and is not final yet.  We will be always looking for feedback and configs from servers to improve the vanilla version.

The weapon system has been done for a month now, but since I want full moddability and a better way to balance the game, every single value has been externalized into an easily moddable config (/data/blockBehaviorConfig.xml).  It turned out to be the right decision, as while I would have been able to push the update out further, balancing would probably in the end be taking at least twice as long as implementing the fully modability.

The config, like e.g. the blockBehaviorConfig is individual per server, and automatically downloaded to the clients.  That means, each server can have its own balance and set of rules if they wish to.  You can even push config changes live ingame, so a server could for example engage a config that is meant for a certain minigame.  Unique config’s per sector/region are also planned.

There are two new basic weapons in the game: A damage pulse, that does area of effect damage to all blocks in range, and the damage beam, that works like the repair beam, only the other way around ^^.

The Cannon (Weapon Computer), Missile (d1000), Damage Pulse, and Damage Beam (names are wip), are the MAIN systems, which can be used in combinations.

This system extends the old weapon system by a huge number of possibilities.

You can connect any MAIN system to any shooting system (salvage, astrotech, etc, as well as all MAIN) to get a change in the weapon behavior. 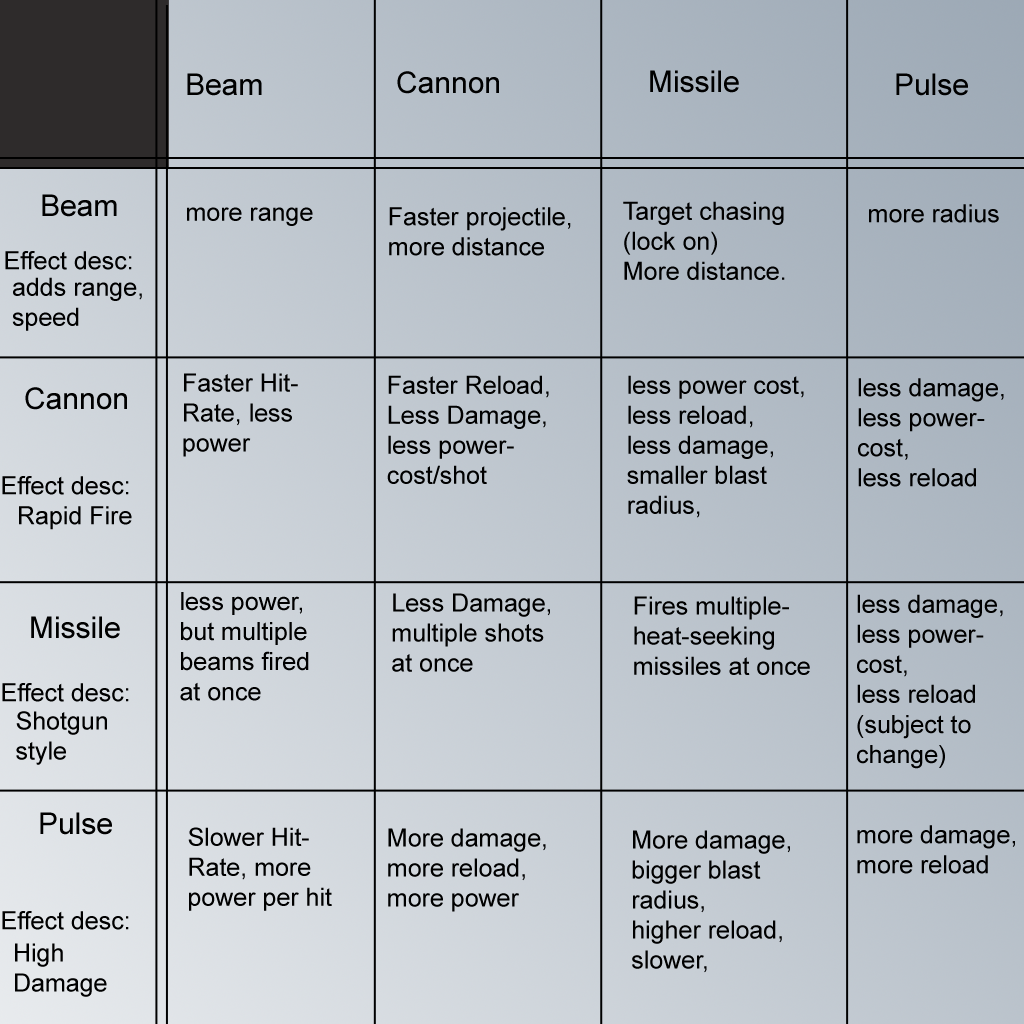 Not only can you combine your weapon systems, you can also add an effect to it.  Effects change how a weapons damage is applied on impact.  There are already 8 effects to choose from and more to come.  The effects can be connected to MAIN systems, but you can also use the effects as stand-alone systems to get a defensive bonus on your ship.  The same ratio system applies here as well.  If you connect a 50-block effect to a 100-block Weapon, you get half of it’s bonus.

-Combination: Converts the weapons damage to instead do damage to the

power of the enemy ship.

-Combination: Adds an explosion effect to the weapon dividing its damage

among 6 blocks at once.  Adds extra radius to missiles and pulse.

-Combination: Does more damage to shields, at the cost of less damage

-Defensive: Hardens shields with a % of damage reduction.

behind the point of impact at the cost of focused block and shield damage.

-Defensive: Protects against piercing and punch through effects.

consecutive blocks in a line as long as the projectile has enough damage remaining after the previous block.

-Defensive: Hardens block armor with a % of damage reduction.

-Combination: Add a physical push to your weapons in exchange for less damage overall.

-Defensive: Gives a burst forward to your ship (valuable in battle.)

-Combination: Adds a physical pull to your weapons in exchange for less damage overall.

-Defensive: Gives a burst backwards for your ship (valuable in battle.)

-Combination: Converts dps into a braking effect on your weapons to hold your enemies in place.

-Defensive: Nullifies the effect of natural gravity (e.g. from planets.)

These can be achieved the same as other weapon combinations are, simply link any light emitting block to the primary computer and its projectiles will now be in that color.

To make handling effects and combinations easier, players can now edit them in a completely redesigned weapon panel.  With this, you can just drag & drop your prefered weapon together without having to manually connect the parts.

You can also now drag the weapons directly into your hotbar to use.

Enabling a navigation filter now also applies to the target markers you see on screen.

Also, the structure panel is now available for Space Stations, as well as planets.

Furthermore, you can now activate any block in build mode.

Some new admin commands include /give_look and /give_slot these will allow an admin to more easily give specific block types.

Another brand new feature is a fully fleshed out logic system. With this system you can design any functional system you like.

These, and much much more are now possible.

There are 6 new blocks available:

Planets are now dodecahedrons! Existing planets in old universes will not be replaced, only undiscovered planets will have the new shape.

The reasons for choosing dodecahedrons are: they have the best trade-off between a round shape, and still maintaining the logic of a block based game. Also the implementation does not require a special case for every single thing in the game, which in other „rounder“ options would end up in a situation where I would basically be putting most my resources into implementing planets for a long long time (with doubt that it would even work or be fun to play at the end).

The planet core is the center of the planet.  It has hitpoints, and heals very fast if hit.  But it can be destroyed.  If that happens, the planet will blow up, and all the planet segments will fly off into space (for performance reasons they will not collide with other objects for that time, but they will become physical again once they stop).

You can also now name your planet with the faction module on one of the segments.  If you want to change the name, on another segment, the first name has to be reset to “Planet” or nothing.

A lot of new decorative blocks have been added with some amazing textures by Tom (Kupu): 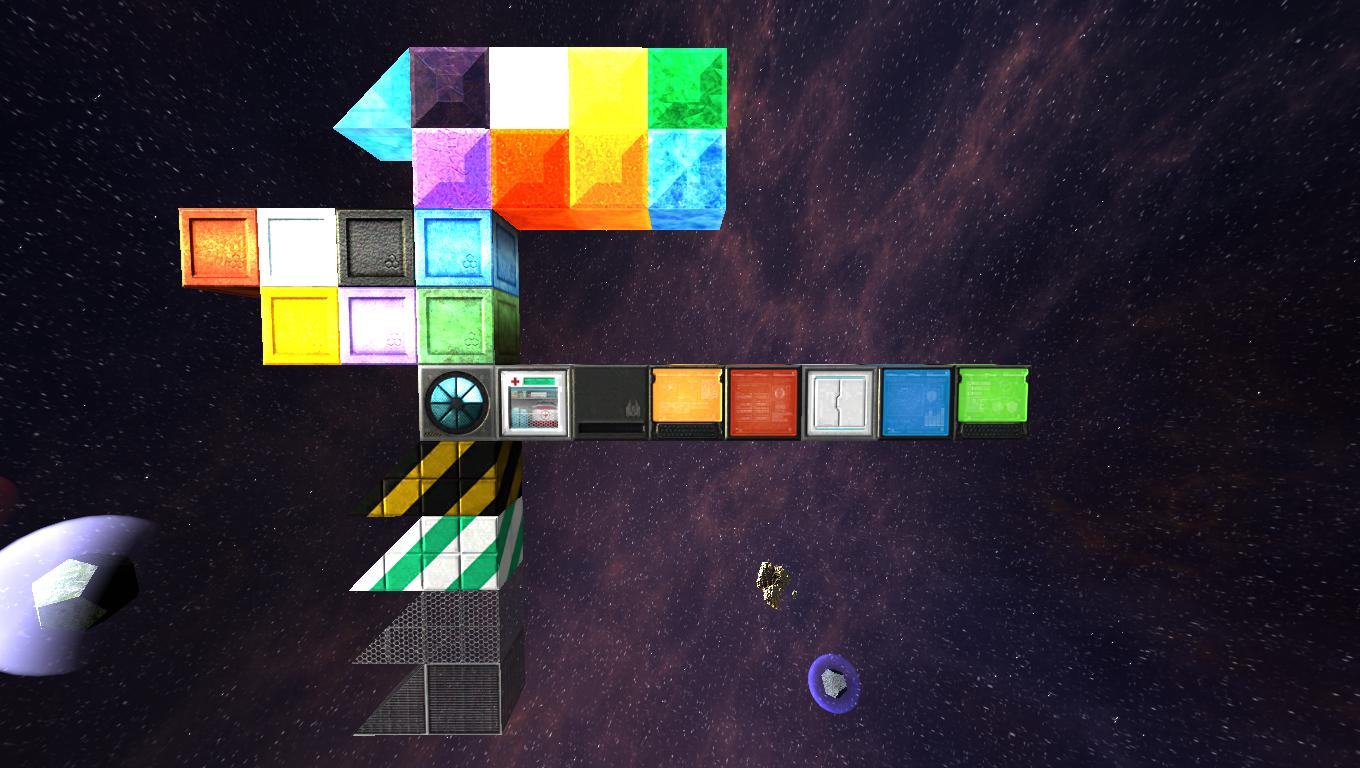 All new and improved Normal maps have been added among many other texture and animation fixes. Plex lights now also have an On / Off texture.

New default ships made by Zero_Sen and Calbiri, using the new weapons, have been added to the default blueprints for the trade guild and pirates to use.

Graphics effects will be added later, when the new particle system is done.

Amongst other small optimizations, a huge physics optimization has been made to ensure further scaling of the game. Especially for huge ships colliding, new algorithms have been implemented to reduce the time taken to search for colliding blocks (in millions of blocks).

Also the physics system will now attempt to solve situations where objects get stuck without warping to give a better ship battle experience.  It will now just push the ships outside each other using a low-performance-mode of the physics.

Far over 100 bugs have been fixed over the last months as well.  Please go to the StarMade Bug Tracker to get an overview.

The testing has become a lot more efficient and streamlined thanks to AndyP, who did great work setting up and maintaining the new tracker.  (I had some trackers before but I always ended up doing everything myself, which kind of defeats the purpose, so I kept a personal tracker only up until now). Thanks to all the testers.

Please be sure to make a backup of your Universe, as bugs might still be happening, because we only have so few testers.

If you want to become a tester, please send a message to AndyP through the forum.  Also, the new launcher that is planned will give testers exclusive access to the dev builds.

Whats to come next

With the weapon and logic systems implemented I have a lot off my plate.  I plan update more frequently and not put so much into a build all at once.

The next few updates will focus on a redesign of the crafting system, then warp drives/gates will be coming.  Along with that we will work on the content for the creature system (3d models etc.)