See image below for how to install the dev build. 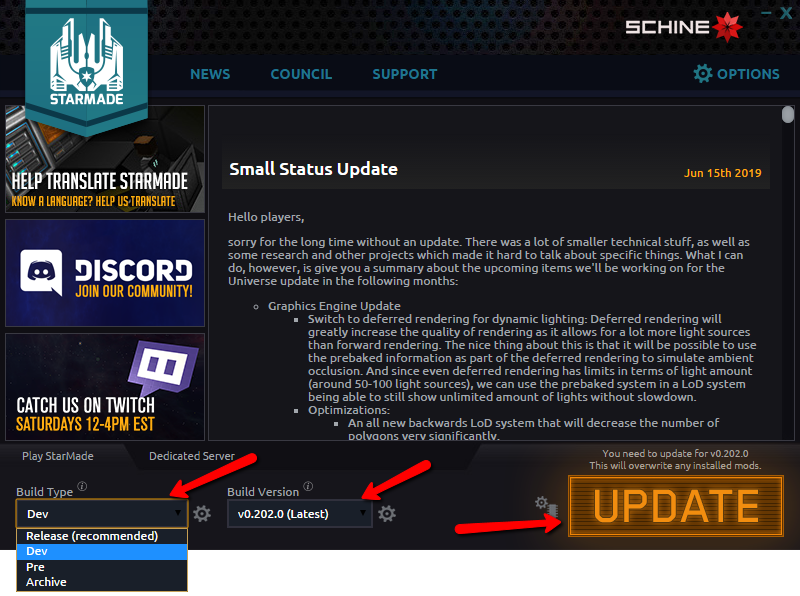 In the next dev build, we will be fixing issues with beams and possibly changing shield mechanics to a customizable shield system (using rectangular dimensions instead of spheres. A bit like the ancient docking zones). This will enable ships to customize their shields a lot better. Also, the build GUI will be cleaned up and simplified to reflect the config (a lot lighter since distance/bonus etc can be removed). Overall this will make building , in‌ ‌general, lot simpler.
Modding In an effort to make modding more accessible, we've decided to take a few steps that don't take us a lot of time to implement, but have a massive impact. What we've done so far:

A modding proposal based on the input we received from modders has been created by Zidane and Gabizou from the Minecraft Sponge Team[www.spongepowered.org]. You can check that out here[docs.google.com]. We plan to follow this document when implementing further modding support over the coming months. Modpack considerations/proposals have been made by progwml6 and Benevolent27 here: modpack format[docs.google.com] The input we've received has been keeping in mind the following:

If you're a modder and would like to give your input on modding in StarMade, we'd love to hear it over on our Discord #modders-dev channel here: Join the StarMade Discord Server![discord.gg] Alternatively, you can email DukeofRealms here: tai@schine.games Thanks to all the modders who helped us We received a lot of useful feedback and input from modders, we'd like to thank those that helped us so far here: The Fabric team[fabricmc.net] (asie[github.com], sfPlayer1[github.com], Prospector[github.com], Grondag[github.com] and modmuss50[github.com]) who have given us very useful advice for modding, specifically with regards to mod-loaders. Also for accommodating changes to fabric-loader to help DistortSM, a StarMade fork of some of Fabric's projects. Also, thanks to asie for pointing us in the right direction and giving us solid advice to base our ideas for modding support off. The Sponge team[www.spongepowered.org] (Zidane[github.com], gabizou[github.com], progwml6[github.com], jamierocks/jmansfield[github.com], Katrix[github.com] and Snowie[github.com]). Zidane and gabizou for creating the StarMade modding proposal google doc, putting a lot of their own effort/input and collecting others' input from our Discord channel into the document. progwml6 for putting a lot of thought into the security and specifics for mod syncing and modpacks. Katrix and Snowie for sharing their expertise about mod repos, from their development of the Sponge mod repo (Ore). Thanks to kashike[github.com], DemonWav[github.com], madmaxoft[github.com], darkhax [github.com]and Clienthax[github.com] for joining our Discord modding channel and giving their input on StarMade modding. Thanks to Benevolent27[github.com], Alendon[github.com] and TheDerpGamerX[github.com], members from our own modding community, who have provided invaluable feedback and are working on some awesome projects. Special thanks to all the people below for enduring the endless number of questions and conversations about modding:

Finally, NZSmartie[github.com] for starting the DistortSM[github.com] project, which aims to provide a working mod loader (which they've achieved) and a community created API. He's worked with us to help bring modding into StarMade, getting involved in many conversations. He's been a massive help to kickstarting a StarMade modding community. I’ve tried to include everyone if I missed you, I’m very sorry, we’ll rectify it ASAP :) QuickFire project QuickFire is a community-run project to balance a wide range of systems/features in StarMade. This is done through our extensive configuration files. For more details about the project, check out our news post about QuickFire from last week here:https://starmadedock.net/threads/cs-quickfire-initiative-rebalancing-starmade.31361/ Important details:

Check out our news post about QuickFire from last week here:https://starmadedock.net/threads/cs-quickfire-initiative-rebalancing-starmade.31361/ Important links:

Thanks to the QuickFire team and all those who have/will contribute to the project. We will be adding names to this post and future ones when we get a list from the QF team :) Thanks for playing StarMade, ~ The Schine Team