Posted by schema over 4 years ago

In our latest pre-release version, we’ve made two changes to the reactor <-> stabilization mechanic to make it more dynamic, and tie a new gameplay aspect to it.

The first change is how stabilization affects your reactor power generation to make it a lot more dynamic by introducing more risk-reward for building in a certain way, and to make the stabilizer distance curve less of an obstruction.

Players are now able to get full power regeneration at a low level of stabilization, currently set at only 25%. This allows you to get much more raw power which directly translates into more firepower, more mobility and functionality.

Essentially this means, you can build the same amount of stabilizers either 75% closer, or 75% smaller at optimal distance without any power penalty.

However, there will be negative effects in place to make you consider getting more stabilization than the bare minimum, besides not running into a power reduction as soon as you drop below 25% in combat.

We’re still working on these negative effects, but each effect would be limited to a phase between a minimum and maximum % stabilization for each.

Possible effects include extra damage to systems, explosions, or up to direct reactor damage upon any hit.

All of this will be available in the blockBehaviorConfig. If you have any ideas for possible effects, feel free to share!

Any stabilizer group and its active reactor now gets a non physical beam that connects the two groups together. This beam is automatically created and can be redirected through energy stream nodes. A node is a simple block that will be used as a waypoint for the beam to find its stabilization group. They can be made into a path by connecting them into a chain. The start and end point of this stream will always be the active reactor and a group of stabilizers.

Here are two energy streams, each connected to their stabilizer group. The width of the stream depends on the reactor size, but is distributed over the stabilizer group sizes. 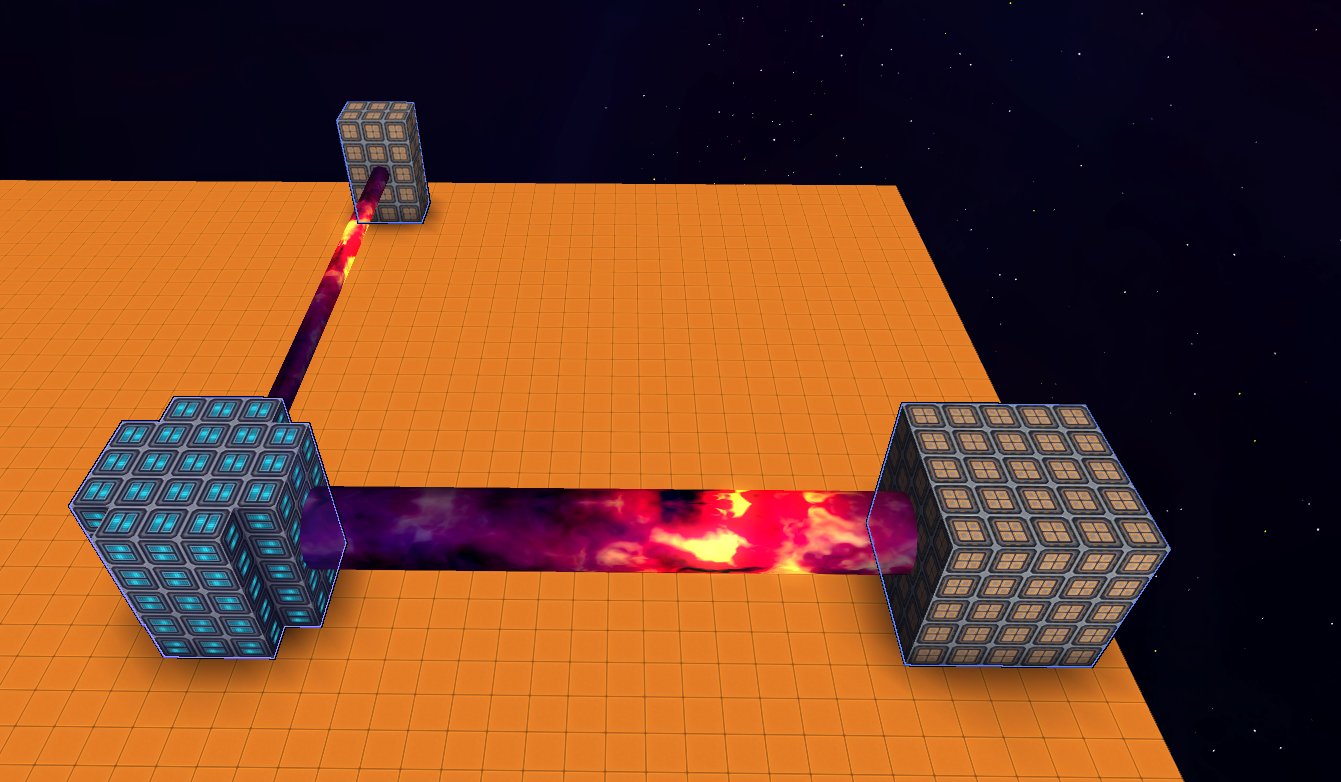 This stream, while non physical, can still be hit by weaponry. Any damage dealt to the stream will instead be redirected to your reactor power generation in some way. In the current build, it simply disables your power regeneration for a few seconds for testing purposes, but this mechanic will be changed to a more dynamic mechanic. A reasonable one would to have the damage to the stream, apply damage to its stabilization group instead. It is very easy to hit if exposed, as you can "cut" through it with a beam.

The main purpose of this stream is to emphasize on the stabilizer-reactor relationship. Block conduits between reactors have been ruled out before not only for performance and scalability reasons, but also for the possibly difficulty in maintaining them. We were looking for a system that would incerease the role of the stabilizer-reactor relationship, while not being too bothersome to maintain, too complicated, abusable, or imperformant. Since the energy beam is generated and its effects visible it should be a natural progress for the player to undertstand its mechanics. It is also versatile enough to allow for a lot of ways to balance, as that would also be very hard with block conduits.

Group integrity creates the decision to either make denser stabilization groups or suffer from extra block damage if hit. It also results in a long and wide stream, making it easier to damage this particular group by hitting the stream.

This mechanic should encourage to make more than just one stabilization group, and in different locations to prevent the same hit from damaging multiple streams. It also makes any “island” ship pretty much impossible to fully protect as now there is also a visually exposed stream to target. You would need to visually hide this stream and try to protect it as best you can.

We also hope that these changes will make other shapes more interesting for ship building. An example would be a ring of stabilizers around your reactor to minimize the energy stream. However that doesn't have any inherit advantage, since the ship is still as vulnerable as other ships, maybe even more so. A line ship might be an efficient shape, but a dangerous choice as any breach in that line exposing the single energy stream might lead to its downfall.

Stay tuned for more information on the release, as well as more news for the upcoming weapon update.